Here is another example of using a CD4051 multiplexer, or more accurately a pair of CD4051s in parallel. I had lifted much of the core logic and circuits from Dave Jones designs. Again these are old designs offered from a historical perspective.

I built this sequencer for a public access facility I was involved with for a while. At the time they only had a black and white switcher. I built this sequencer in a box along with a Dave Jones color sync generator, a simple oscillator, and a Dave Jones output amp. Though this sequencer has a sync insertion section in the final stage that removes the color burst, using it with an output amplifier, which reinserts color burst, allowed the members of the group to use this as a color switcher for studio shoots, and as a sequencer.

A video sequencer is a processor that will sequentially cut between some number of inputs according to a clock. Commercially they are popular in security settings where a single monitor would switch between multiple security cameras. Artists have used them for real time cutting between multiple sources of imagery, either camera sources, or outputs of other modules. You can use a sequencer to create a live wiggle 3D effect with two or more cameras, as well as patch irregular clock signals to move rhythmically between multiple versions of a patch. The sequencer I have in my modular synth, and a similar one built for the Experimental Television Center, had two additional modes to determine switching between between sources. In the binary mode, instead of just a single clock input (oscillator), there are three switches, and jacks, to define a 3 bit binary word that in turn determines which of the eight channels is on. Using the three jacks instead of the switches means you can use three oscillators to determine the switching. This will seem to randomize, or create an irregular order and rhythm to the sequence. I can also feed comparator outputs into the three binary inputs, potentially using three mattes to layer eight sources (or two comparators to layer 4 sources...). Pedestal controls for each channel allows for adjusting the black levels of the video sources, but using a +-5 volt output for the sequencer, you can also use the sequencer as a control voltage source, using the pedestals without video sources. When built with pedestals that have voltage control inputs, you can use this to cut between sound sources in real time.

This is a simple eight channel sequencer; it can take up to eight video inputs. It has no second level control, nor is there a binary mode. It does, however, include a CMOS 74C922 key encoder to encode eight momentary switches used to select a source, not unlike a bus on a traditional switcher. The selected channel will either output (switcher mode), or determine which channel the sequencer will count up to before going back to channel 1 (sequencer mode).

The front panel has a mode switch for switcher/sequencer, and a switch here labeled VIS, which stands for vertical interval switching. When VIS is on, in the sequencer mode, the sequence rate will go no faster than vertical, and the switching from the oscillator will occur during the vertical interval, preventing any visual glitches. You would need to turn VIS off to see bars when you increase the oscillator beyond field rate.

The choice was to go with one multiplexer or two. Two was easier to build. With one I would have had to construct eight input circuits, one for each channel, that has a pedestal control mixed in. Instead I fed the channel inputs and pedestals through 100Ω resistors directly into the muxes, and the output of each mux is summed in an amplifier, making one summing amp instead of eight. The final stage uses an MC1445 which provides a trim pot for amplitude, and where compsync is reinserted, yes ripping off color burst making this a black and white signal. The final stage was taken directly from the keyer design found in an earlier post on this site. The LH0002 was used as a buffer and current amplifier. Unfortunately the MC1445 and the LH0002 have been discontinued.

One mistake in the design is that there should indeed have been 8 input stages, with clamping circuits, using a single multiplexer. I recall this having a slow but annoying pedestal drift. 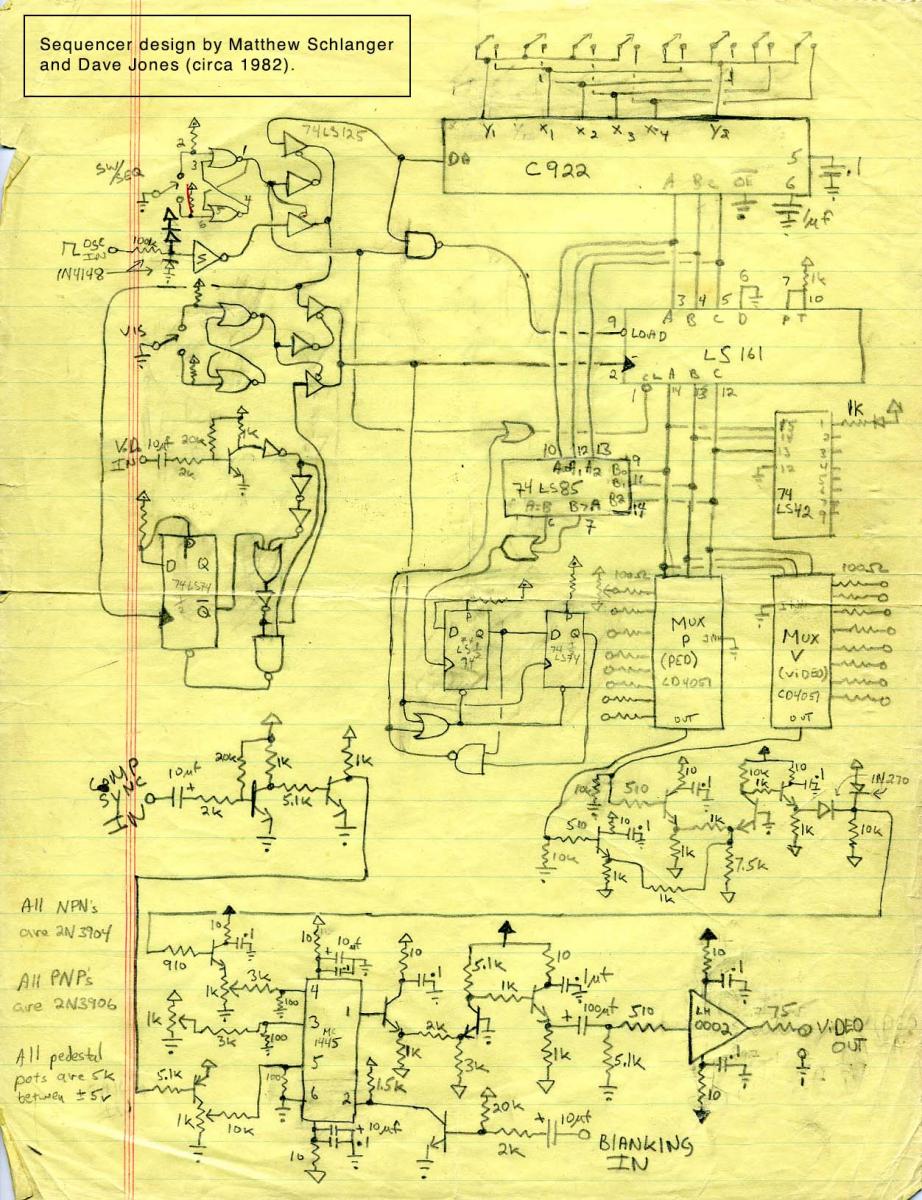