I had originally written and posted this on L2O, a social media network project I worked on for almost 4 years. As L2O is being shut down I am migrating a couple of posts here. Since writing this the CCM-3340 was put back into production. http://www.matrixsynth.com/2016/06/curtis-cem3340-vco-chips-re-issued.html

Three years ago I started a small audio synthesizer, in part to involve my son and have him experience this kind of activity. It was also intended to be a kitchen table top synth built into a 6” x 8” X 4” box, matching another I made a long time ago. I had several of these boxes left over. In fact the whole project was about using parts from my stock, no matter how antiquated the approach. This was the first synth I have built in maybe 25 years, I did some research on Muff Wiggler and looked around at what people were building. I remember writing a post saying that I felt like Rip Van Winkle, I had woken up after a 25 year sleep and found that nothing had changed (most of the designs and schematics were the same), except now you can’t get the parts.

In fact I was wrong, even if this was true about DIY, or more true at that time, the Eurorack revolution has generated great modules and modern technology combining digital and analog has pushed the medium forward.

In the past I had built audio circuits I found in Bernie Hutchin’s Electronotes, mostly from his Preferred Circuit Collection, and from Richard Brewster who provided me with a good deal of circuits from his own hand. At that time, what I was seeing on the web included many of the same EN circuits, originally printed in the 70s, plus published Serge designs. Except now there had to be substitutes or the discussion was about finding supplies for out of production parts, like the CA-3080, Temco resistors, and matched transistors. For the latter there are newer substitutes, and I stocked up on a few. I also used to like building with the Curtis Music Instruments chip set (CEM). These were well known from use in the Oberheim instruments, as well as others. https://en.wikipedia.org/wiki/CEM_and_SSM_chips_in_synthesizers

My favorite VCO, of those I built, was a Rich Brewster modification of an Electronotes' Preferred Circuits VCO option. Alternatively CEM chips are really easy to work with, they cut your construction time, however the VCOs tended to not have as good bandwidth and stability as the best EN designs. The later was able to be used for video as well as audio. I found CEM chips go now for about $75 a piece and up, they have been out of production for a long time.

For this kitchen table top synth I planned to include a new VCO, a dual filter given to me and built by Rich Brewster, another utility VCO, noise and a new ring modulator. I also added a single channel line level circuit. The VCF had been kicking around on my desk for years. The fact that this board ended up in my hands instead of inside one of Brewster's racks was not due to its lack of interesting qualities. At first I might have had doubts - filtered HP and LP inputs? The layout seemed odd. I find it the star of this box which included mostly vanilla modules. This VCF was built on the CEM-3350. Curtis made decent filters, but again, not as good as an all out ENS-76 VCF option 1.

For the VCO, I was thinking of building EN variant again but then noticed I had 2 CEM-3340s in stock, so I went easy and built my last CEM VCO ever.

I also decided to build another Rich Brewster circuit I found in the pile, actually it’s a simplified version of ENS-76 VCO option 2. I only built it with two outputs, triangle and I added a sine shaper like that used in the CEM circuit. This is my favorite sine shaper. It’s easy to trim, gives a good shape, and you don’t need a CA-3080.

As mentioned I also added a noise source, a line level output, and a ring modulator. For the ring modulator, I found the AD-533 was another out of production part, but found the AD-633 was a good substitute, with some changes it was really easy to build and works well.

So after building and tuning the circuits this box sat on my desk for a few years. I had second thoughts about this kind of construction. Since starting this I have discovered the wonders of the new world of Eurorack modules. I will never build a synth like this again, there are so many great modules one can buy. Really amazing things that go far beyond these kinds of vanilla modules. After considering building this into a different foot print, maybe Eurorack, I decided to go forward with the original table top design concept. It is portable and I don't regret it.

I finally picked this up again, wiring is always the hardest part. I finished this about a week ago, the end of December. So here is some documentation of a really old school approach to building a modular . 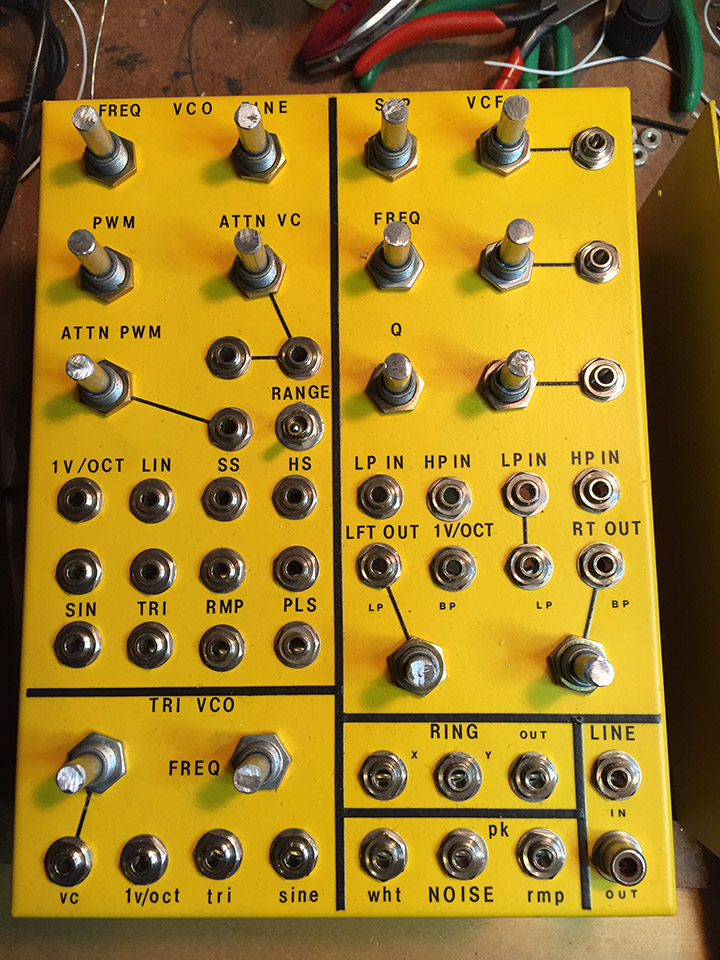 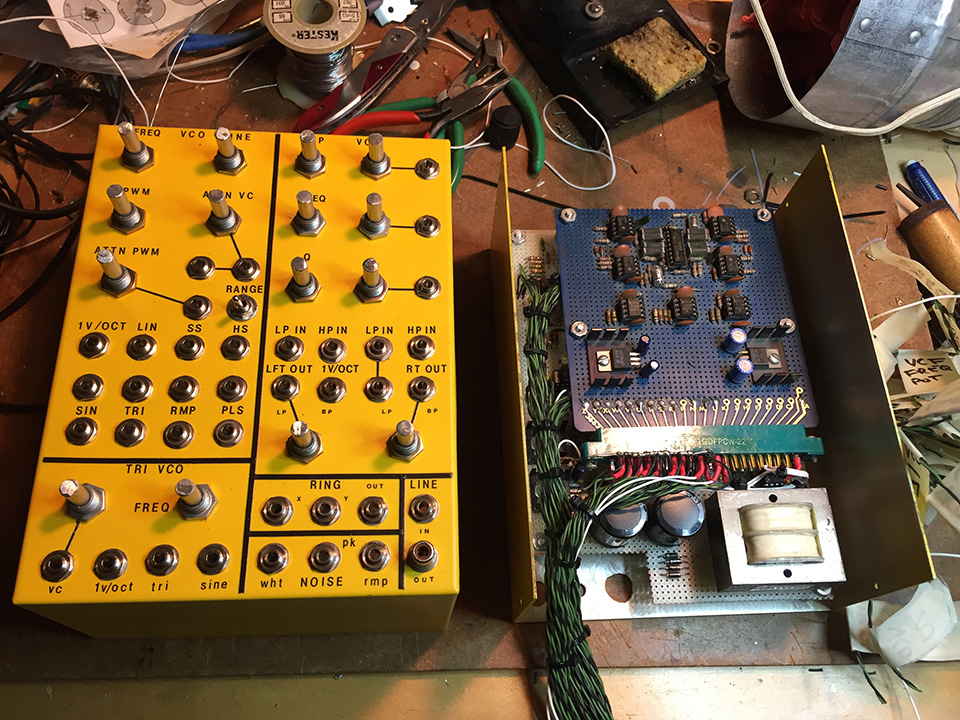 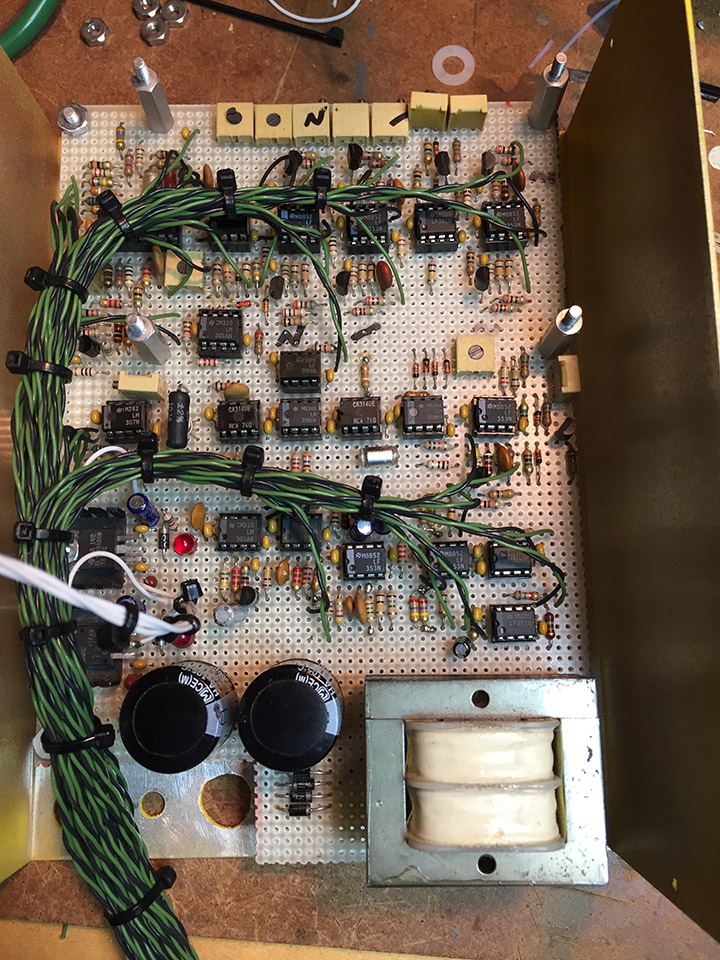 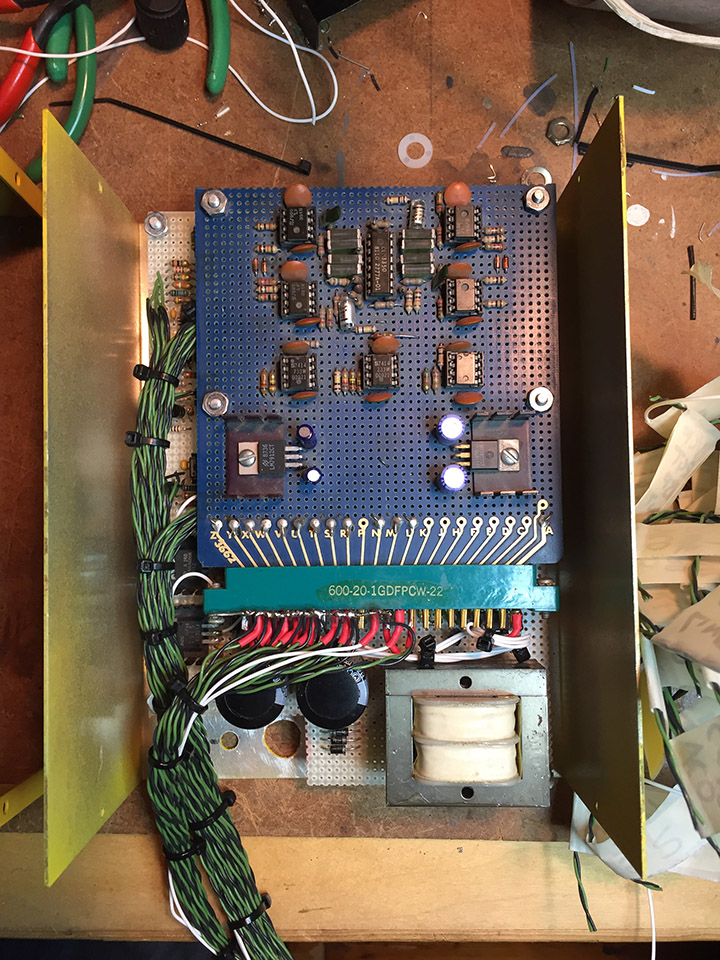 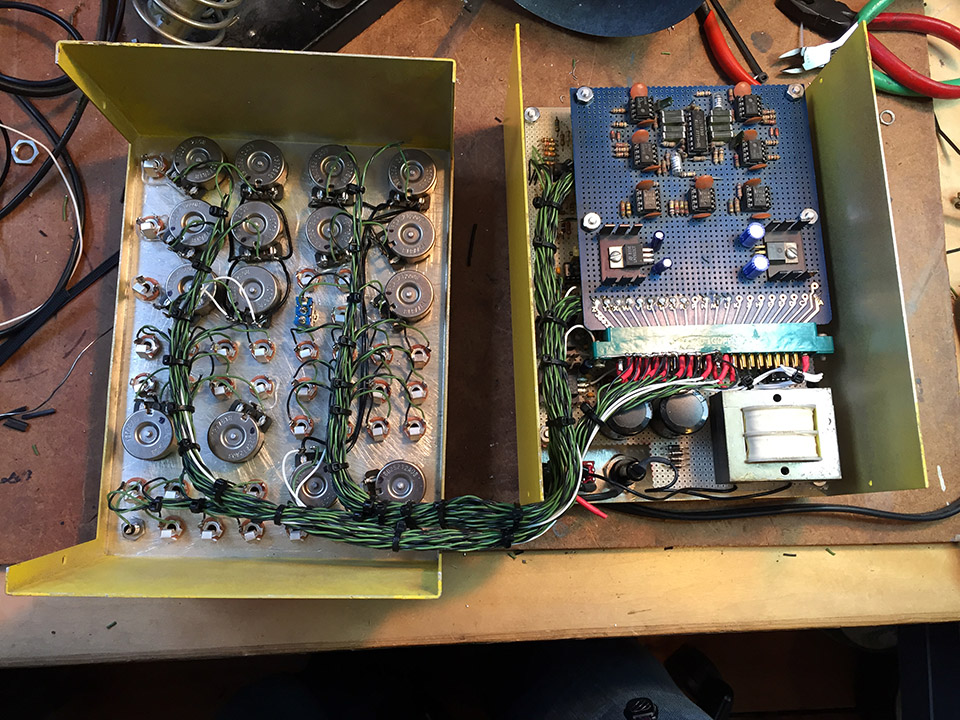 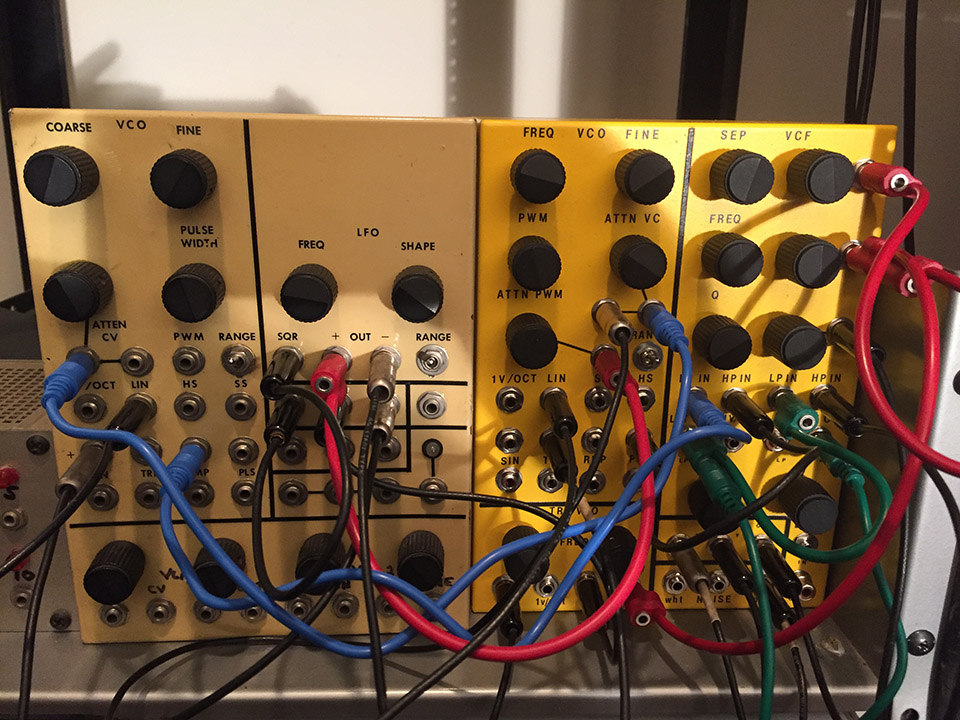 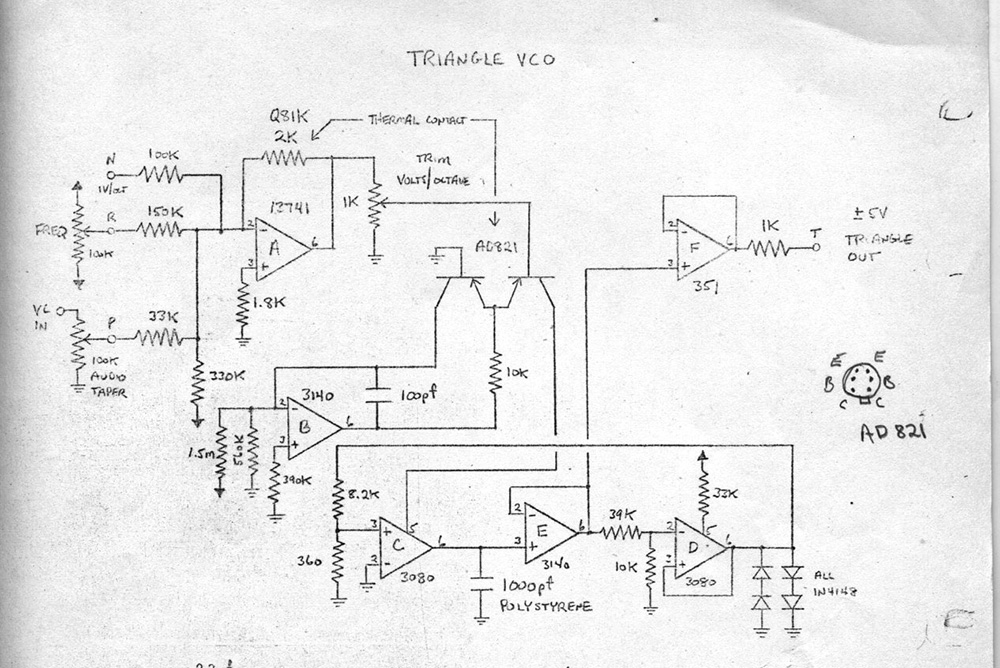 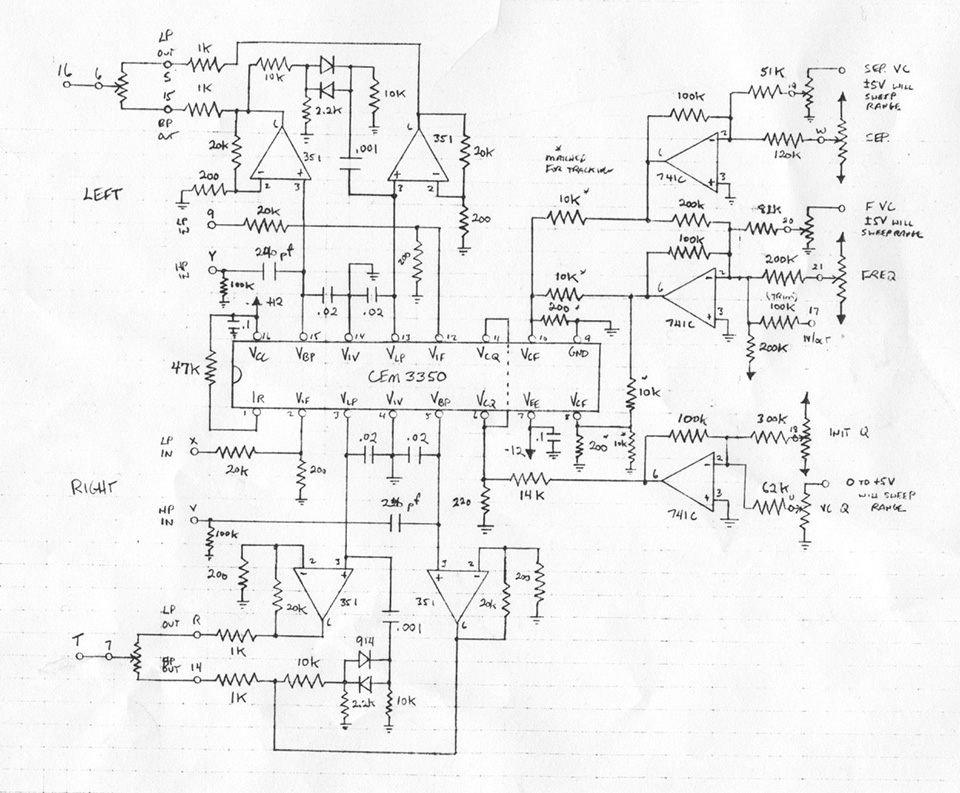