This Jones video synthesizer is comprised nearly exclusively of Jones designs. This synth includes a video patch panel made of an inset piece of hardwood with mini-jacks carrying 2vpp differential video. Subsequent modules used Plexiglass. The advantages of this standard is that it limits crosstalk and noise, and making a video signal negative one simply uses a cable that flips the polarity of the wires. It was thought for a time that this system would be embraced by Jones in general, however no synthesizer at the ETC uses the format. The system at the ETC patches standard single ended 1v video through a slide matrix. Using differential video was a great idea but as an unusual standard it only made sense for patching within the panels of multi module synthesizers, and other than a few of the Tuesday afternoon participants, it was an idea that was not really implemented. Unfortunately Jones has yet to manufactured multi module synths as Hearn did. 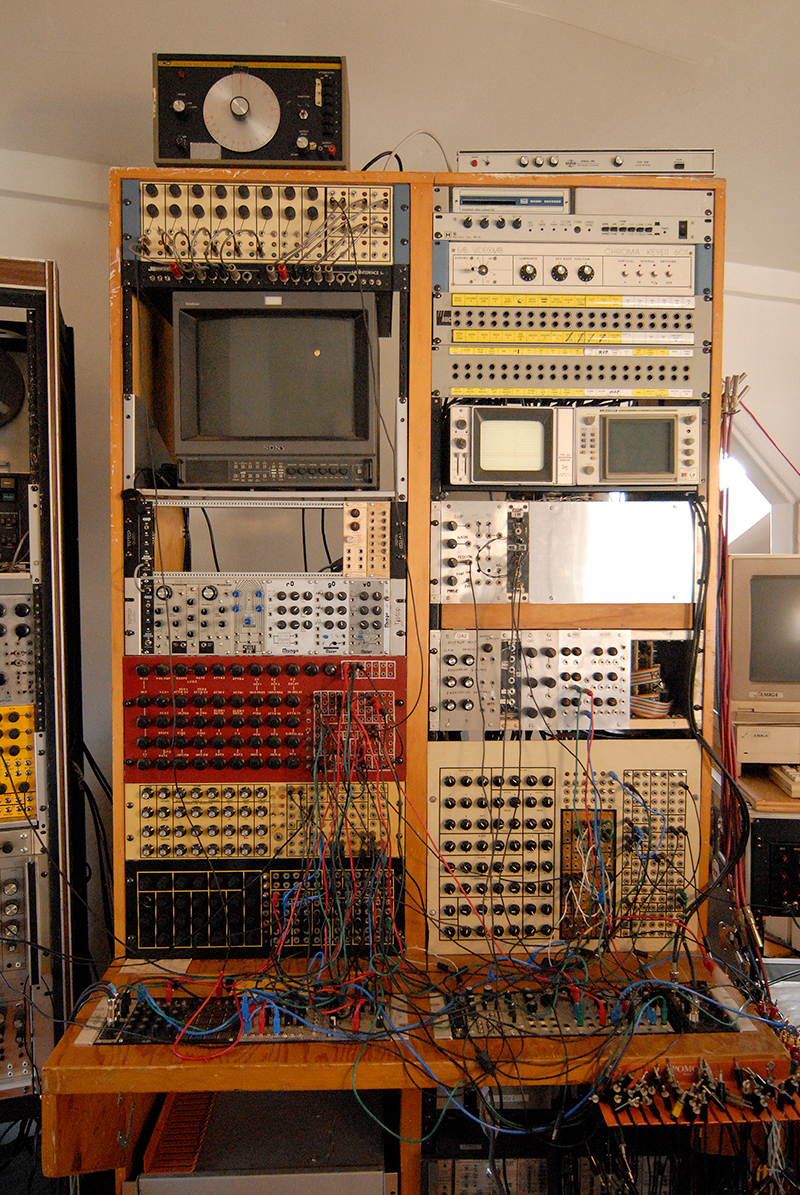 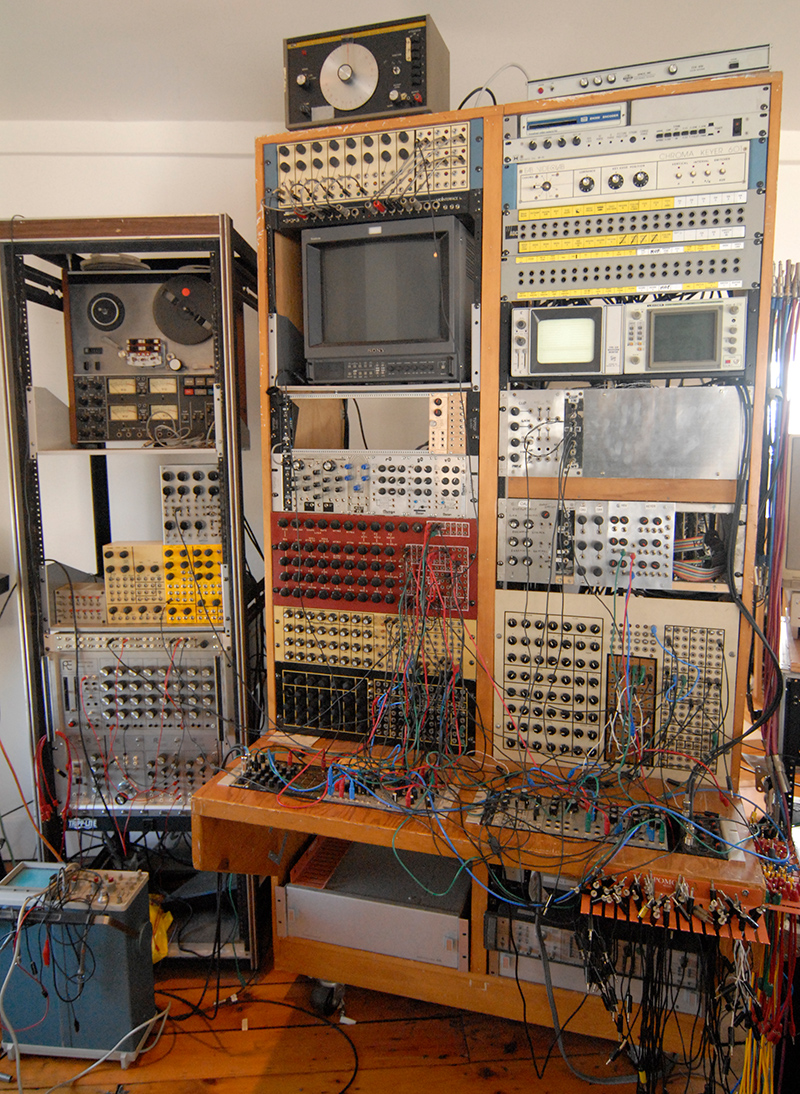 The keyers, and mixers include amplifiers on the video inputs that offer control for gain and pedestal - knobs, +-5 VC jacks, and video rate VC jacks for each. This offers a great deal of control but also demands a great deal of adjustment for each patch. The video VCAs, pos/neg voltage control video amplifiers, are different in that they have a gain control that goes from full negative to full positive with 0 gain in the middle of the pot. They also have both an input pedestal and output pedestal control which was uncommon but not unique in Jones synths.

The keyers (one is a prototype and one a customized version of the keyer that came from the four board project) are hard edged and have gain and pedestal controls for each channel input. They also have switching for on/off and normal/reverse, as well as logic inputs for force A and force B. One approach for colorizing is to patch phase-shiftable subcarrier into the video rate VC input of a pedestal for a given video signal (often a pedestal of one of the keyers). Additional color control can be offered by first patching the phase shifted subcarrier through a video amplifier, affording amplitude control of the subcarrier.

The comparators can be cascaded into either digital or analog control inputs and used to control the video mixer. But as they are also hard edged the comparators ended up not being as useful as was hoped, there were already 2 hard edged keyers in the synth. Still a comparator is an important conceptual element in video synthesis. Keying with a Hearn is accomplished by using the “key Source“ modules to control video sources in the mixed video amp matrix. The key source modules output ranges from hard-edge (like a comparator) to soft edge control signals. This was likely a high gain amplifier with gain control. The later yielded nice results. 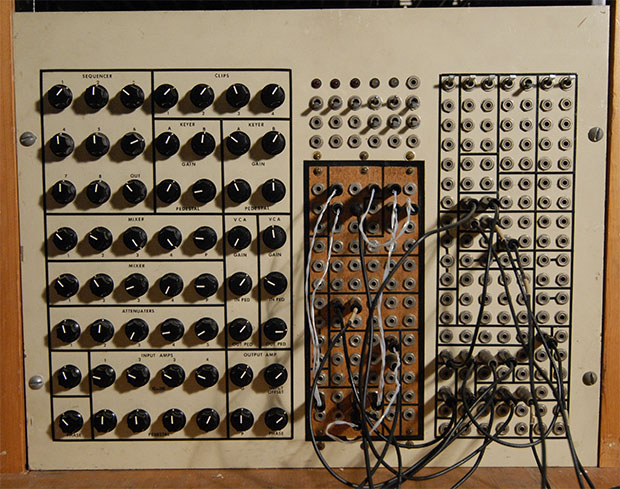 I was inspired by the Hearn Videolab design and Jones designed some modules for me based on that metaphor that probably do not appear elsewhere in Jones’ synths. At the center of the Hearn is a video matrix which is 4 or 6 rows of cascading video mixers, yielding a 4x4 or 6x6 matrix. The 2 Jones video mixers are designed upon a similar concept except they are not cascaded and they have more second level control. Unlike the rest of the Jones modules, these are relatively stingy on control, each mixer has a master pedestal knob, and each channel has a video input, a video rate gain input, an analog (+-5) gain input, and a pedestal knob. With a Hearn the matrix (the video mixers) are used for everything, keying, dissolves, sequencing, which is why there were 4 or 6 rows. This illustrates the opposition between two views of design: smaller conceptual generalized modules that can be patched together to perform functions, and larger modules that are dedicated to a single function. Hearn and Sandin synthesizers sit at the former end of the continuum while commercial video processors, a switcher, would live toward the latter end. A similar continuum can be found in programming when deciding between very generalized versus non-generalized code architecture, and though this metaphor ultimately fails, in both cases generalization can offer both efficiency and burdens. Jones tended toward designing complete video building blocks, like keyers and frame buffers, rather then further break down those functions to the component parts as Hearn did. It should be mentioned that Hearn’s modular design is in part the brilliance of his synthesizer. I built with an eye toward splitting the difference between the two approaches. With the other modules in this system, two rows of 4 channel mixers were enough. The mixers became the core of this system, they were a great success. They allow for waveform mixing and control of video but also are used for cross dissolves and soft edge keys.

The input amplifiers are used to take single ended standard video into the synth and deliver it as 2v differential video on the patch panel. They have gain and pedestal control and as they are high gain they can also be used with the video mixer to obtain nice soft edge keys. However, unlike a Hearn comparator, instead of offering complimentary outputs from the input amp, a “Y” cable that has one end of the Y inverted (negative) is used to drive the two sides of the key.

The sequencer is eight channels with pedestal controls on each channel. Any oscillator, or vertical sync, is patched as a clock and channel control is obtained with 3 switches which define a binary number determining, depending on sequence mode, which channel the sequence will count to before returning to the first channel, or which channel is on. These switches also have VC inputs so control signals can be used to seemingly randomize channel selection. One can also patch the comparators into the sequencer bit switches making the sequencer into a multi-tiered keyer. 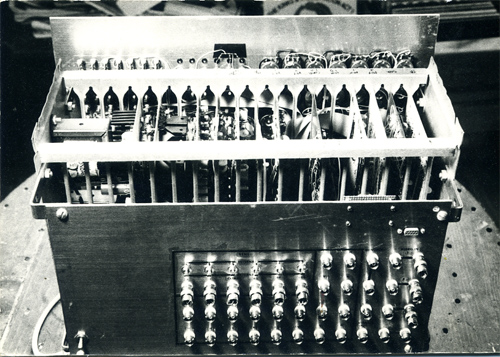 The output amp is the same as the standard Jones output amp. Though there were complaints of clipping chroma at 0 and 100 ire rather than –20 and 120, this is a very stable device that affords the user excellent control. With an input and output pedestal the user can adjust video pedestal for 0 gain and full gain.

This Jones synth is unique for Jones devises in that it is built as a modular synth, where as most of what Jones distributed has been buffers, keyers and sequencers built as discrete units needing patching from standard video panels or matrix. One thing that is lacking, and it was lacking in general from Jones, Sandine and others, is a cohesive approach to color phase shifting and delay lines, as was done with the Hearn, and any commercial switcher (however the advantage of those two cases is that limiting the ways in which you can use, or patch, the device makes a phase compensation scheme much simpler to implement). In general a complicated patch will take a great deal of adjusting/tweaking and a look at the back porch can at times reveal an ugly site (a good output amp aside), for example the frame buffer had a substantial delay. But while Hearn’s Videolab offers a concise metaphor and system for processing with careful consideration for phase shift and delay, it does so at the cost of simplification, though granted a Hearn can yield a great deal of variation. This Jones system, as well as the ETC system, on the other hand offers greater variation with the addition of maximized second level control and clean stable circuits, however it does so at the potential cost of yielding a very complicated synth to operate (at least in this case). On the other hand Hearn’s video labs were also difficult to use, though restrained, as every patch, particularly using the matrix, needed to be built from smaller modules versus say the Jones Colorizer, which unlike this system, is a single function device with a clear interface. With this Jones synth, complication of use is also increased by the panel layout. In order to save the cost of multiple cases and power supplies, and while I, like most others, designed interfaces for general consumption to have panels divided by module and by function, my own synths tended to group all knobs, video patches and analog jacks by type, and then by module and in very tight space. This approach was learned from Rich Brewster, who also did the same thing, when I was built my first audio synths.

(This was excerpted from an earlier 1997 text.)

Fantastic article and photos, thanks so much for posting this!!

Matthew Schlanger, on my first residency at Experimental Television Center I saw your tapes in the Library, with titles like Lumpy Banger and Bad Knees, and of course I popped them in the 3/4" deck right away. I've spent a quarter century studying how you make those surreal, scary yet funny shapes rub, copulate and punch each other... you are the master video synthesist! Yours is an excellent Dave Jones studio, even without his legendary Colorizer... And, I admit you and Rich Brewster were right about putting all the knobs in one place and the jacks in another. Oh, btw I just got my own MX50 with the proc amp control knobs mod ;)