CMOS analog multiplexers were frequently used at the ETC for various purposes. Here I thought I would present a circuit I borrowed from a Dave Jones design, and slightly modified it, to build a black burst generator.

Video systems need sync to ensure that all the devices are in time with each other, and sync is also a component of composite video. In the less recent past sync signals included composite sync, subcarrier, blanking, and burst flag. In addition some devices, usually cameras, required horizontal and vertical drives. That's six signals, all in time, created by a sync generator and distributed with distribution amplifiers. All are low true pulses except subcarrier, which is a 3.58 MHz sinewave. Subcarrier is used to encode color content, it is present in the image component as chroma, and as a color reference in the burst. Don't confuse black burst with burst. Black burst is a fully encoded video signal with black for image content, burst is the 9 cycles of subcarrier that appears between the breezeway and the back porch of all composite video signals.

My first Jones sync generator did not have black burst, so as I neared completion of my modular synth I realized I needed to add one. This circuit was built onto a small board that was added to the back panel. 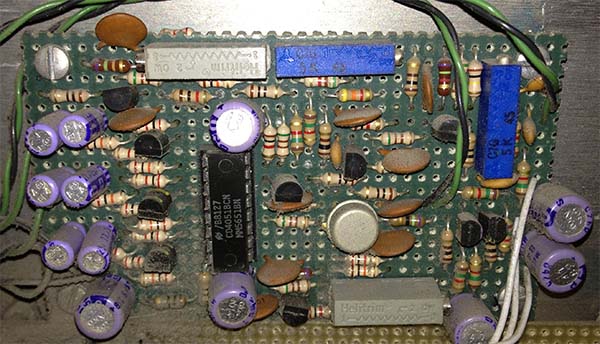 This circuit uses an eight channel CMOS multiplexer/demultiplexer, the CD4051. You can find the datasheet here: http://www.datasheetcatalog.org/datasheets/120/109150_DS.pdf. This mux allows you switch between 8 different analog sources based on a 3 bit binary word. They are bidirectional so you can also use them to demultiplex as well as multiplex, they have a wide voltage range, and they have pretty good frequency response, sufficient for a composite video signal. Of course here, there is only one signal with any bandwidth we are concerned with, subcarrier, that will connect to the output when both blanking and burst flag (BF) are true. Notice the subcarrier goes through a differential amp that I lifted from the Dave Jones output amp, and it has gain and dc trimpots that can be used to set the size of the burst (+20 ire to -20 ire) and the burst centering. When blanking and compsync are true, a dc voltage is connected to the output. This voltage has a trimpot which can be used to set the sync level (-40 ire). When blanking is false the black level dc signal is connected to the output. It also has a trimpot which is used to adjust the black level (7.5 ire). And in cases where blanking is true and burst flag and compsync are false inputs tied to ground are connected to the output which define the level for the front porch, breezeway and the back porch. Notice the buffers for the 3 pulse inputs also invert the drives from low true to high true. Simple, but you can begin to see the possibilities. In a future post I will describe how I used a mux to build a sequencer. 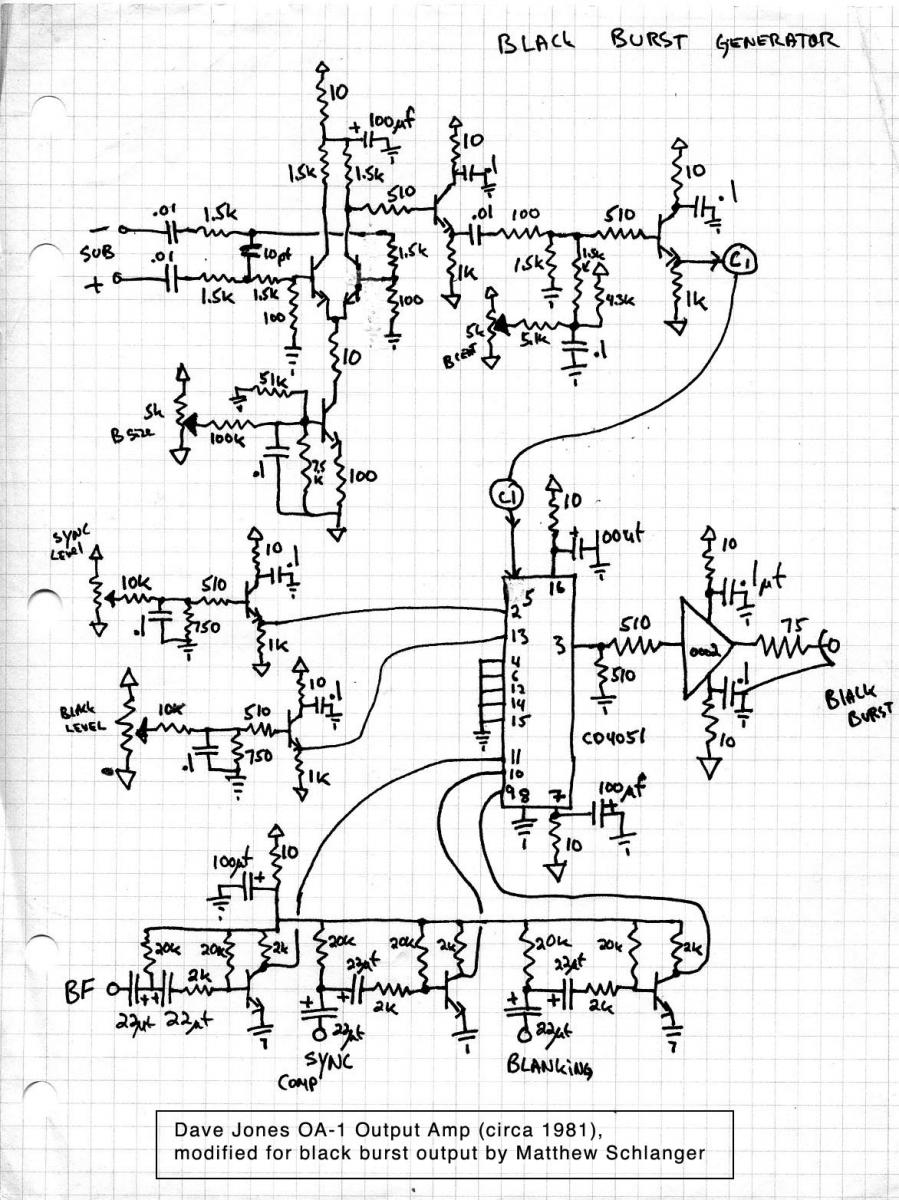